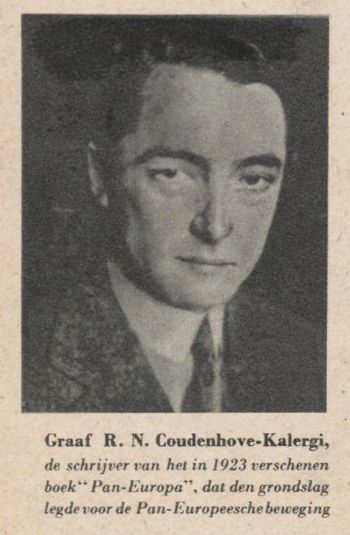 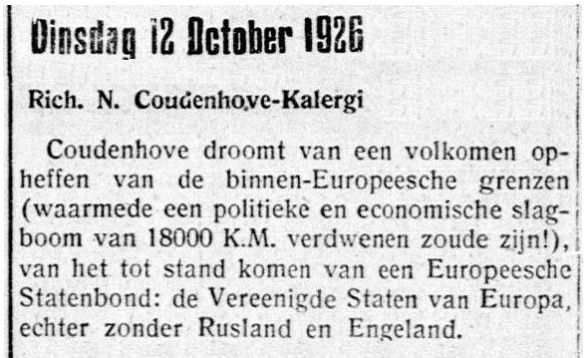 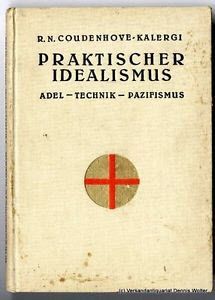 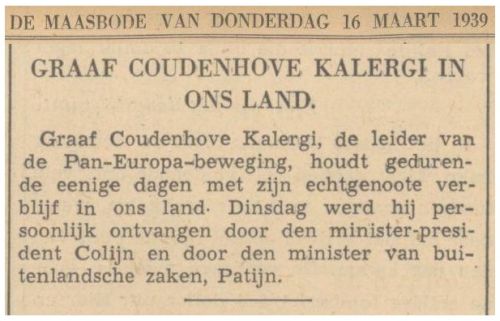 Coudenhove-Kalergi is in 1972 overleden. 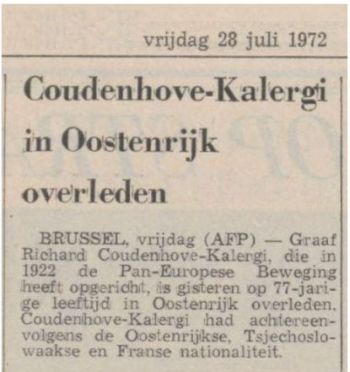 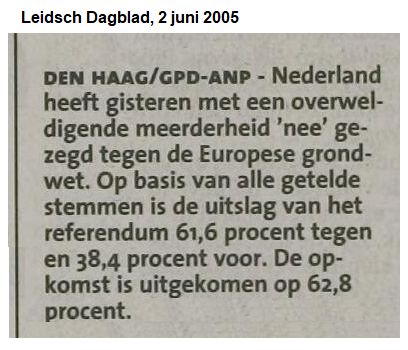 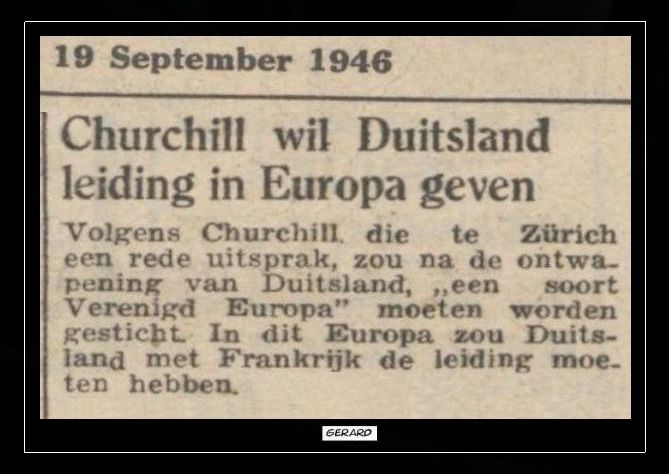 (1) Final Resolution of the Political Committee

The General assembly of the Parliamentary Association for Euro-Arab Co-operation calls upon European Governments to take initiatives forthwith that will help to secure the withdrawal of Israel from all territories occupied in 1967.

The Association emphasizes that there can be no just and lasting peace settlement without recognition of the national rights of the Palestinian people. There has already been almost unanimous acceptance by the International Community of this principle, which Israel must also come to accept.

The whole Arab world has agreed that the P.L.O. is the sole representative of the Palestinian nation and this decision has been endorsed by an overwhelming majority of the countries represented at the United Nations.

The Parliamentary Association urges European governments to recognise this fundamental point in the initiatives they should now take.

First, they should call on Israel to halt immediately the expropriation and confiscation of Arab property in Israel and the occupied territories.

In particular, Israel must end the process of the “Judaization” of Jerusalem which it has illegally annexed and the establishment of new Jewish settlements in the occupied territories.

Secondly, the European governments should try to get all interested parties including Israel and the P.L.O. to the conference table, if possible within the context of the Geneva Conference. Europe itself, either through its member states or through the E.E.C. could play a valuable part in such a conference if called upon to do so. It would be reasonable to expect all concerned not to resort to military action of any kind for the duration of the negotiations.

Third, they should urge both the Israelis and the P.L.O. to agree to leave in abeyance discussion of ultimate solutions and concentrate on the immediate abd practical task of trying to find a modus vivendi which will require the acceptance by Israel of the rights of the Palestinian nation and of the existence of a Palestinian state on the West Bank and in Gaza if the Palestinians decide to establish one, and reciprocally the acceptance of the existence of Israel within her 1967 frontiers.

Finally, the European governments should urge on all concerned the crucial importance of effective peace-keeping machinery and should agree to take an active part themselves in such arrangements.

The Parliamentary Association recognises the problem that is posed by the fact that some of the media and publishing houses of Europe are dilatory in disseminating facts about the Arab world and intends to use its influence to overcome this problem.

The Parliamentary Association recognises the help done to the understanding of the Arab cause and growing sympathy for it in Western Europe by the liberalisation measures taken in various Arab countries and by the readier access to Arab countries by the news media, businessmen and other visitors from Europe.

The Association calls on European governments to improve legal regulations concerning the freedom of travel and the protection of the basic rights of immigrant workers in Europe which should be equivalent to those of citizens of the countries concerned.

The Association considers that the political settlement of the Israeli-Arab conflict is an absolute necessity for the establishment of a genuine Euro-Arab co-operation. Nevertheless, the Association considers that the political aspect of co-operation in not limited to this point alone, and has in mind for example the free circulation of ideas and people in the world as a factor for the maintenance of peace, for the support of freedom and in particular for a harmonious development of co-operation between Western Europe and the Arab nations.

The Association believes that the prospects of long-term Euro-Arab co-operation in all fields have never been so favourable but that they depend on a peace settlement based on justice in the MiddleEast.

(2) Final Resolution of the Cultural Committee

The General Assembly of the Parliamentary Association for Euro-Arab Co-operation, meeting in Strasbourg on June 7th 1975,

Having considered the cultural resolutions adopted by the preparatory conference for Euro-Arab parliamentary co-operation held in Damascus from November 12th to 17th, 1974, which reaffirms in the present resolution,

convinced that significant results are possible in the cultural field of the Euro-Arab dialogue,

regretting that cultural relations between European and Arab countries are still infrequent and limited in scope,

regretting the relative neglect of the teaching of Arab culture and Arabic in Europe and looking forward to its development, hoping that European governments will help Arab countries to create the resources needed for the participation of immigrant workers and their families in Arab culture and religious life, asking the European press to show a sense of responsibility so that they may inform public opinion objectively and more fully about the problems of the Arab world,

recognising the important role which Friendship groups and Tourism can play in improving mutual understanding,

Calls on the governments of the Nine to approach the cultural aspect of the Euro-Arab dialogue in a constructive spirit and to give a higher priority to the popularisation of Arab culture in Europe.

Calls on Arab governments to recognize the political effects of active co-operation with Europe.

Invites national groups of the association to increase the efforts necessary in every country to bring about the objective proposed at Damascus and today at Strasbourg and ask them to inform the Secretariat of the results achieved.

Considering the harmful effect of the political situation on Palestinian development,condemns – while recognising Israel’s right to existence – the Zionist intention of replacing Arab by Jewish culture on Palestinian soil, in order to deprive the Palestinian people of its national identity,  considering that in carrying out excavations within the holy places of Islam in occupied Jerusalem, Israel has committed a violation of international law despite the warnings of UNESCO, considering that these excavations can only bring about the inevitable destruction of evidence of Arab culture and history,regrets that UNESCO’s decision not to admit Israel into its European Regional Group has sometimes been exploited with great lack of objectivity.

(3) Final Resolution of the Economic Committee

The General Assembly of the Parliamentary Association for European Arab Co-operation reaffirms the usefulness and necessity of a close economic co-operation between Europe and the Arab World in the interest of their peoples.

The Assembly considers that there is no conflict between the interests of Europe and the Arab countries, provided that the mercantilist stage is left behind and genuine economic partnership can be established.

This is the perspective within which can best be solved the problem of recycling petro-dollars. These petro-dollars should above all be used for needs of Arab development.

The Assembly calls attention to the role and status of multi-national companies and the potential danger arising from certain of their activities. It expresses the hope that steps may be taken to avoid these dangers.

The Assembly reaffirms the right of every nation to dispose of its own national resources, including the right of nationalisation.

The Association expresses its will to do all in its power to promote Euro-Arab co-operation at national level, within the E.E.C. and through international organisations.